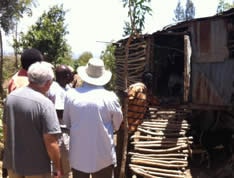 Pastor Paul of Kinale Hub reports that the Church has steadily been growing. The youth have increased in number in his Church. Kageraini Church too has been growing since the Church rented a place. The Church is planning baptism, a revival and children dedication in May.

He is glad through the efforts of the Church; they managed to acquire musical instruments. They are praying for Chairs and electricity installation.

Pastor Michael of Osieko reports that since he got into Osieko, the Church has also been growing steadily and currently has a membership of 65. He also plans for baptism in May.

Pastor John of Butere reports that the ministry is going on well. He had a baptism of 48 members of Ebushibungo Church on April 6th 2014.

The US team visiting Kenya in March, Robert and Jeffrey led by Rev Okongo visited Kenya and Ethiopia. While in Kenya, the team visited Maasai land, and gave goats and sheep to orphans in Noosikitok. The team also visited Lositeti, and saw the borehole site, and then proceeded to western part of Kenya. They visited Katito, House of Hope where they donated goats and medicine. The team also donated sports equipment to Noosikitok, Lositeti and House of Hope Schools.

Team visited goat project for the spiritual leaders in Kandaria

Goats for orphans in Katitio

The joy of a young man with his goat

Team donating the sheep in Noosikitek

Mashenani Church in Kajiado, near the gate of Amboseli is still on going under the tree. The community has responded positively and the Church is growing.

We are praying for a provision for a Church building for the community.