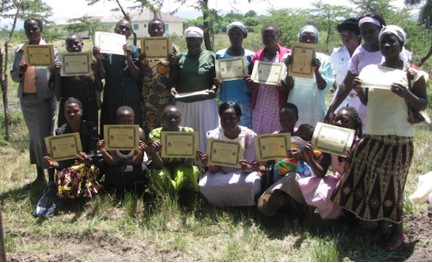 The head teacher of Noosikitok, Mr Naingola has placed an appeal to U4A and friends to assist with this terms’ School Feeding Program. He says they have a shortage and are anticipating hard times that will subject the students to absenteeism and non- concentration. We are appealing for the support and praying that all goes well with the children in the quest to transform the area through education.

The House of Hope Chapel hosted a Bridges for Women training from 25th – 27th Jan 2013. The trainers, Rosemary, Euniter and Master trainer, Justine had a team of 25 women in attendance. The trainees came from different churches i.e. Baptist Church, Roho, SDA, AIC and Apostolic Church. It was great to see the ladies volunteer to bring their own food so that they can be in the training over lunch without going back home. House of Hope Chapel chipped in the food budget shortfall and helped with transport as U4A gave the certificates.

The graduation was done separately with trainees being awarded in their churches. This will be significant since they are to reach out to other women in their churches and communities with the Gospel.

Trainees posing for a photo with thier Bridges for Women certificates

Rosemary (from left), Justine, Euniter posing for a photo
with one of the trainees as they award a certificate.

The small groups started by Pastor Muchiri in Kinale are doing a great job ministering to people in the community. He reports that 2 women gave their lives to Christ in January and are set to be baptized on 17 Feb. 2013.

Pastor Michael of Wichlum is grateful to U4A for the mosquito nets donated. He says cases of malaria have dropped among the assisted and prays that we get more for the kids since the area is endemic of malaria. Some of the children who have been sharing are now better. Most importantly is that some parents have joined the Church after using the mosquito nets as a bridge to reach them.

The Redeemed Gospel Church in Sibanga carried out Bridges 1 training on 14th – 17th Jan. 2013. Pastor Jacob was the trainer and had 12 participants. The team was excited of the approach used by Bridges one in usings songs, drama and stories to minister to people. The participants also found the cycle of the Church growth, the steps of dialogue and the list of stories and parables in the Bible most helpful. We hope that the seed planted amongst them will germinate and they reach out to many more for Christ.

Note From The Board – February 2013
Scroll to top