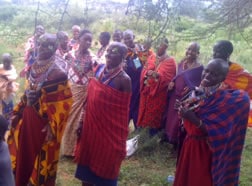 1. The Matapato Baptist Association did evangelism involving eleven churches during the first week of September. This saw many people converting and accepting Jesus Christ as their Lord and Saviour. 2170 people gave their lives to Christ. Let us pray that they stand in faith and grow in Christ. Lets also pray for follow up that is going on.

A section of Maasai community attending the Evangelism Meeting

2. The drilling of water well in Lositeti is complete. The water has been tested and we are waiting for the results on its quantity and composition. We hope we shall complete phase II of the project that will ensure piped water to the school, piped water to collection points for animals and the community at large, water pump and a power machine. We are hoping for more partners to join into this venture.
Find some pictures below for the borehole drilling, pump testing and the community members.

Water being pumped out on site during testing

Mamboleo Church managed to give 60 Bibles to teenagers in the Church. They urged them to use the bibles to reach out to friends, and bring them to church and equally enrich themselves with the word of God.
Also, 15 Bibles were distributed to Ongadi, Guba, Nyawita and Osieko Churches.

Pastor Paul of Mamboleo, attended an Interdenominational Church Conference in Uganda. He attests that out of the conference, 6 people saved.

Pastor Paul of Kinale Church reports that in Kageraini (Nyandarua), the fellowships are on and the families meet in members’ homes on different homes.

Kieni, which was an IDP camp, (Internally Displaced Persons) had a church established. However, the government closed the camp and the IDPs have relocated to different areas, making it hard to track the Church members.

Pastor Paul also reports that 4 women were saved during September through the fellowships that take place. He also, notes that through Bridges Training, many young people have adopted the story telling model and are reaching out to the community with the word of God.

Pastor Paul had initiated reaching out to Grade 8 girls with the Sanctity of Human Life in the larger Kinale region. During this exercise, he got some partners from the village that donated 500 sanitary pads and he donated to the girls.

Kenya has experienced a terrorist attack on the 21st of Sept. 2013. The attackers raided a shopping mall,

and shot 67 dead and injured 175 people. This was a very barbaric act and we are praying for unity, love and peace, not only in Kenya, but across the world where terrorists are killing and maiming innocent people.
Peace must prevail