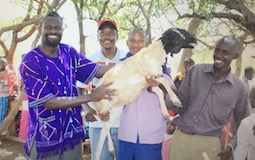 In 2012, Unite 4 Africa supported Orphans and vulnerable children with goats in Noosikitok community. Peter Mpapa was already a big boy but was not in school. Unite 4 Africa helped Noosikitok School with a feeding program that saw a big number of new children register to join school. That’s when Peter Mpapa, a big boy already, got interested in joining school. Peter took a bold step to visit Lydia, who is Rev Moses Rianto’s wife on the possibility of joining their school so he can go far from home to avoid the shame of being at the same class with young kids. When Unite 4 Africa supported Orphans with goats, he also received a sheep. The one sheep he received in 2012, he took good care of it and multiplied as years go by. From the one sheep he received, he was able to severally pay for his school fee and buy school uniforms. Peter is living with his mother who is old and has no work. At one point, the county government was issuing allotment letters for plots and peter sold two his goats from the family of the one goat he received to pay for it. In 2018 Peter graduated his primary level (grade 8) again sold his goats to help him join secondary school. It has been challenging for Peter but God has been a blessing through the one goat he received from Unite 4 Africa. It is a challenge for Peter now as Secondary school requires a lot of funds for fees. Please pray for him that God may see him through secondary school and possibly join University.

Fig. 1 Peter Mpapa receiving a sheep in 2011 when he was 18 years and in grade two and Fig. 2, Peter now 26 years and form one (grade 9) with three of the remaining sheep

During the month of April, Rev Moses Rianto led a group of youth to do evangelism in Karero village. Karero has been in known with Alcoholism and witchcraft. We had three days of evangelism and open-air meetings. The Lord moved in a mighty way and many souls received Christ. 122 converted and we prayed for them and joined the body of Christ. Please that the Lord will water with Holy Spirit so can grow.

During April, we had opportunity to partner with Spear Africa and we held one of the most successful women conference yet in Mailtisa. It was a record 125 women in attendance from different denominations in Mailtisa. Spear Africa brought the Unveiling glory team from the US. These Women from Unveiling glory ministry disciple the local women on How to meet with God, How to parent, How to forgive and overcome your past and were challenged to disciple other women from their local churches.

The Long months without rain has seen many Maasai move with their animals in search of pasture. Many cows died and many people were hungry. In several parts of Kenya deaths have been reported for lack of food. It is this desperation that has led the Maasai men to seek the Lord of the Church, as they call it. That the pastors lead them in prayer to seek forgiveness and repent as they seek for rains. Our Church led the prayers for the whole community. God has been faithful that after one week it started raining. Please pray for many families that are at risk, as they still have no food. Maasai men went on their knees in repentance so that God may bless the land.

At the Oloshaiki Church, Olgulului, we baptized 18 new converts and offered them with new Maasai Bibles. They taught about baptism and they could not wait to be Baptist. We thank God and celebrate with them and pray that the Lord will keep them as they grow spiritually.

Note from the Board: Jim Weisert
Scroll to top