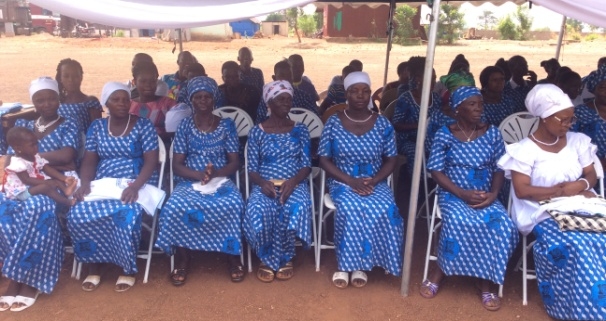 “And as they were frightened and bowed their faces to the ground, the men said to them, “Why do you seek the living among the dead? He is not here, but has risen. Remember how he told you, while he was still in Galilee, that the Son of Man must be delivered into the hands of sinful men and be crucified and on the third day rise.” And they remembered his words, and returning from the tomb they told all these things to the eleven and to all the rest.” (Luke24:5-9)

Why do you seek the living among the dead? What a question and what a living hope? Indeed, Jesus is alive and for that matter we can have the assurance that we too have a guaranteed resurrection after death.

Powdered soap making training was organized for women in the Janjori Kukuo community as a way of ministering to them with the love of Christ which has the ability to empower them in all dimensions of life. There are plans for training in other skills such as shower gel production, beads making, bar soap production, soya milk production etc.

The 10th Anniversary celebration of the Ghana International Baptist Convention of which Samson is the leader took place during the Easter period. It was a great moment of praises and thanksgiving to the most High God for His blessings and goodness over the past ten years.

The Coaching Group has begun to practically learn Bible stories beginning from creation to build a great number of stories that they can use as they start their individual Discovery Bible Studies groups in the community.

Samson was among the Pastors that were selected for ordination as part of the activities marking the 10th anniversary celebration of the International Baptist Convention Easter Sunday. At the ordination a charge was given for them to focus more on the great commission to contribute more in seeing Christ love extended to the unsaved.

Remember to lift up these prayer needs before the Lord.

Yours in His Vineyard