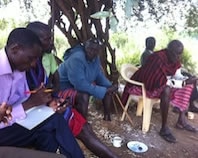 The Maasai community in Kenya is a traditional community and the Church has been trying very hard to get the men to Church. It has been a challenge over the years to get men to church since they look after animals and go into the bush; the Church has been left for the women and children. This culture has slowly been transforming since Churches are using different models to involve the men, including trainings to Church leaders on Bridges to Oral Cultures.

On May 18th 2013, Baptist Church held a one-day training for men leaders in eight of the Baptist Maasai Churches.

These men are thirsty for the water of life – THE WORD OF GOD. Maasai men are slowly embracing the gospel of Jesus Christ. Lets all unite and pray for the Maasai men that they may grow spiritually and lead others to receive salvation.

Photo of a group of men in discussion

Photo of a group of men in discussion

Unite 4 Africa Inc is involved in strengthening education of the girl child by advocating for girls to go to school, assisting the lunchin Noosikitok Primary school, providing mosquito nets for the girls boarding schools and providing text books. We also reach the parents to encourage them to take their children to school. Actually, it is illegal now to keep children out of school. However, in rural settings some parents still keep their children at home and involve them in chores.

Unite 4 Africa, Inc provided Lumbwa primary school with sanitary pads for girls. This is helping girls not to miss schools. We are still working hard to get many involved in keeping girls in school by supporting the “pads for girls” project to keep the girl child in school.

The Maasai community predominantly is animal farmers. This kind of farming is good, however has a major disadvantage during drought. The cattle, goats and sheep die due to lack of grass and water. This has facilitated numerous efforts from stakeholders to diversify. Through continuous training the community is slowly embracing new ways of livelihood. This rainy season many did farm corn and beans and it is a month to harvesting.

Unite 4 Africa, Inc is still involved in training members of the Maasai community through practical means and we pray for the community blend crop and animal farming as part of their life. The draughts ravage this community almost every time killing their animals which is the main source of living.

Maize and Beans in one of the farms

Pastor Paul of House of Hope Chapel in Katito reports that the Bridges for women team is doing a wonderful job in the church and the community. They reach out to the community and also are involved in sharing memory verses, drama and songs in Church every Sunday. They also preach in the mid-week fellowships.

Pastor Paul trains the youth in the Church on discipleship. The trainings do tackle personality development, and the Sanctity of Human Life. (Below are pictures for the April youth training).

Pastor Paul is going on with teaching the baptism class. The team is set for an exam on 22nd June 2013. Those who will pass the exam are set for Baptism on 7th July 2013.

House of Hope has embarked on building orphanage for the children who cannot fit in the community because of various reasons. The girls’ wing is ready and the boys’ wing is still under construction. The Dining hall is also complete. Unite 4 Africa, Inc and House of Hope are praying and hopeful that this home will provide many children in need a place to find love, care, provision, education, good health as in the Book of James 1:27

Out of the fellowships, two men received Christ in May. He points that the teens are very active and have formed the choir of in the Church. He and the Church is praying for 60 iron sheets to enable them expand the Church. They are praying towards a fundraising on the 4th of Aug. 2013.

He is also praying for provision of a Camera and a Computer to enable him capture pictures and share with Unite 4 Africa’s network.

The Redeemed Gospel Church in Mamboleo is still doing outreach in the area. In the month of April, 14 people received Christ. Currently, Pastor Paul is training 6 new believers on discipleship. He has planned for a crusade in mamboleo in July.

The Church acquired a parcel of land adjacent to the Church. They are praying and fundraising for resources to offset the pending balances.

The Church in Ebushibungo has been growing, however, Pastor John reports that the Church has had a challenge of acquiring land and materials. The new strategy is to bring some of the Church members to the main Church on Sundays. They then go back re-energized to strengthen their Church.

Pastor John has scheduled for the Bridges 11 training in June. Two of the church leaders in Miuni area, a new place who have undergone Bridges 1 trainings shall attend.

Kenya has been generally well since the elections in March this year. The new Government is settling down to work now with new Cabinet Secretaries appointed in the Ministries. A few insecurity cases have been reported with gangs killing villagers in Bungoma and explosions in Garrissa. The Government is keen on restoring safety in those areas and we pray for peace, love and harmony across the globe.