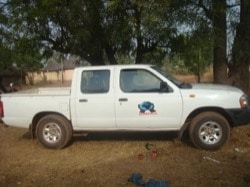 “I am he who blots out your transgressions for my own sake, and I will not remember your sins. Put me in remembrance; let us argue together; set forth your case, that you may be proved right. (Isaiah 43:25-26 ESV)”

We are counted among the blessed ones as we have been offered an opportunity to be part of the living in this early part of 2015. The past year 2014 had some challenges but in the midst of it we were showered with many blessings which when examined critically, one will no longer remember the effects of those challenges.

Looking back at 2014 reveals a series of blessings and significant things that took place during the year. U4A Ghana was blessed with a means of transport in the very early months of the year and this helped greatly in the operations of U4A during the past year.

During the year we were able to organize four Bridges trainings in which 102 Pastors and Church leaders drawn from different denominations participated. The effectiveness of Bible storytelling and understanding oral cultures and the effective means by which Church planters can effectively communicate the Gospel in such cultures were discussed.

The year also witnessed the start of the orphans’ project through which goats are bought for selected beneficiaries as a means of empowering them. Giving them a means by which they can have a better livelihood. This will be scaled up in 2015 and it is our hope that it will be successful beyond our imagination.

The kpalgigbuni water project was another significant thing in the past year worth mentioning. By the grace of God we got the kpalgigbuni water project started for the construction of 30,000 litre water harvesting tank. It is our hope that the project will open doors for the community to experience some relief even though one water harvester is woefully inadequate for the population in the community.

Looking ahead in 2015, we are very hopeful for more blessings and opportunities in the New Year. Some of the things we are getting prepared for include:

Hosting at least two teams from the head quarters

Have an opportunity to begin the Bridges for neighbors’ series

Scale up the orphans project and brain storm innovations

Assist some selected communities with the CHE approach to solving developmental issues.

Continue to partner with communities and donors for the provision of water systems.

Join us in going to the Lord with the following prayer needs:

Yours in His Vineyard
Samson Abukari
(Country Director, Ghana)