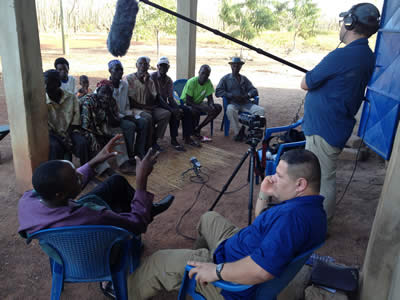 But, as it is written, “What no eye has seen, nor ear heard, nor the heart of man imagined, what God has prepared for those who love him”—(1Corinthians 2:9) – ESV

It was all joy welcoming the U4A President and the film crew who spent two weeks in Northern Ghana on a mission that got accomplished beyond human imagination. Indeed, we cannot but join the Apostle Paul in saying that; no eye has seen nor ear heard nor heart of a man imagined what God has prepared for those who love him.

By the grace of God we were able to host the film crew made up of Okongo (U4A President), Mike (SIU), Gabby, Ryan, Alison and Wade. It was a great joy having the team over here in northern Ghana who contributed in diverse way to in the production of a clip on forgiveness and Mercy and the power of storytelling. On behalf of the U4A team I salute all these people for their commitment, the deep insights they shared and the lessons that we learned from each other.

The crew went round close to ten different communities speaking with real people and listening to their different stories and scouting for appropriate shooting scene locations. In all these communities it was always a joy being received by these communities in a loving and welcoming manner that made the work much easier. We would like to extend our heartfelt appreciation to the people especially, the children of Janjori-Kukuo community (the main community for the film shoot), the Nyoglo, Tarikpaa and Moglaa communities for their support and the warm reception they gave to the team.

Isaac – A Potential Local Leader and Amazing help from God

God in his own way brings special people to cross our paths at his own appointed time. One of such people that God brought into our life during the film shoot was Brother Isaac Mahama. He heard of the team’s arrival, paid a visit and jumped to our support as we moved from community to community and continued to stay with the team till the last person left the shores of Northern Ghana. He played different roles such as a translator, driver, community mobilizer, actor, storyteller etc.

Stories from the Field

A Sheik (an Islamic Scholar) who is also a chief in Tamale shared his thoughts about the work of U4A. He said “What U4A is doing in the various communities is what God expects all mankind to do. That is provide water to the thirsty, clothe and assist orphans and the needy and God will be happy with you”

A woman in one of the communities U4A recently assisted with two rain water systems said, ” we no longer have to travel long distance in search of water and most of our time can now be used in economic and income generating activities”.

♥ New relationships that began as a result of the film shoot will be maintained and strengthened.
♥ Grace for the interviews and film to more than accomplish the intended purposes
♥ Faithful men and women to continue to identify with U4A
♥ Bridges training with Presbyterian Church Pastors and leaders
♥ Preparation for potential sustainability projects in Northern Ghana

Yours in His Vineyard