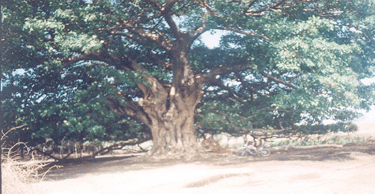 The gates of Hades will not over power it

As we all know that Jesus envisioned His church as a militant church. ” I will build my Church and the gates of Hades will not over power it”(Matt 16:18 NET). According to His promise the church in Ethiopia particularly in Welenchity area has become militant and now advancing the kingdom of God in a mighty way.

We are able to plant 6 churches in three months. As I reported before the village Rukecha in Welenchity area was one the centers of the throne of Satan resides. There is a sub village named by Neye. In that small sub-village many people worshiped idols and their anescesteral spirits under the tree. We went there with our apostolic mission team to do evangelism a month ago. God has done miracle and He gave us…

…one family and they accepted Jesus as their personal savior through the story telling approachs of evangelism.

This picture was one of the trees that the
villagers worshiped Evil Spirit under it.
It was green in the rainy season.

And two weeks before we did an open crusade under the same tree and 16 people have accepted Christ as their personal Savior. God did miracle and the people in the village was expecting that there might be something bad would happened on us from the evil spirit attack because we worship Jesus under the same tree. But, nothing bad happened on us. As a result of that the people in the village changed their mind and said Yes in deed Jesus is the true savior.

People are listening to the word of God
under one of the trees in the area.

Believers of the Neye sub-village

God has been doing tremendous things among us. The need of more trainings for leaders and missionaries is huge. Pray for us in the following areas