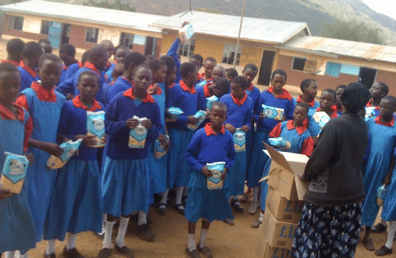 The sanitary pads for girls project received a boost with Carol Mchugh from Canada donating 5 boxes to Enoosampurrmpurr Primary School. We are hoping this pads will ensure the girls stay in school and acquire the education the need instead of absconding lessons because of the monthly periods. We are praying for…

…more partners to join in the project to reach a target of 4,000 girls this year.

Figure 2: Girls with the sanitary pads

Pastor Jacob of Kitale mobilized a group of pastors from the region to train them on Bridges 1. He had a total of 14 pastors/leaders and trained them between 21st – 23rd Feb. 3012.

The Leaders were excited that the training opened their eyes and that now they feel equipped to do outreach anywhere. They liked the use of stories, songs and drama to do ministry. They are planning to visit Marakwet communities in the coming months to reach to the people with the word of God.

The Bridges 1 for Butere Leaders took place between 7th -9th February 2012 at Marenyo. Pastor John, a Hub leader trained 6 on how to employ the Bridges strategy in doing ministry to the oral community.

We pray that those who have acquired this information will be champions of Change in the campaign against abortion.

Figure 3: A section of partcicpants at the SOHL training

Figure 4: Johnson Okwama sharing with the youth about the SOHL

Figure 5: Jecinta, a trained counselor also sharing with the youth about the SOHL

Figure 6: A section of the Youth participants

Figure 7: A section of the youth participants

How Big is U4A's ministry

Updates From Ghana – May Newsletter2012.
Scroll to top