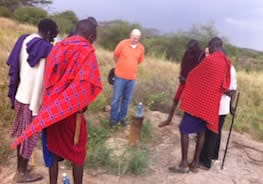 The team participated in a number of activities: meeting Church leaders from the Baptist Association and shared about Church leadership, donating sanitary pads to Enoosampurrmpurr and Noontoto Schools, donating Maasai Bibles and Chairs to Karero Church, text books to Lumbwa. The team participated in Lunch feeding program at Noosiktiok Shool, and finally a park drive at Amboseli National Park.

Pastor Eric at the Borehole site with community leaders

Barry (M), and Eric praying at the water well in Lositeti

Pastor Eric at the back poses with Lumbwa Children and teachers. The team donated text books to the school

Team Eric (L), Moses, teachers and Barry (R) pose for a picture on donation of text books to Lumbwa School

Robert Anderson and Jeffrey Stewart also had a chance to visit Kenya and Ethiopia alongside Rev. Okongo Samson from 17th Feb. to 2nd Mar. 2014. The team visited Maasai villages of Lositeti , they visited the school and the water project site, where they met the community leaders and prayed together for its completion.

On 27th Feb., the team went to the western part of Kenya, where they visited Katito House of Hope Project, Dr. David tok them through the project and the visited the hospital, orphanage and the school.

They also visited the Goat project for Spiritual leaders in Kandaria at Mama Yuanita’s home. The team wound up the trip with an easy Saturday doing a boat ride in Lake Victoria. On Sunday, before departure, Rev okongo gave a sermon at House of Hope Chapel on “God’s appointed Time” from the Book of Gen. 18

Jeffrey with the kids in Lositeti School

House of Hope organized a Women seminar on 22 Jan 2014. The theme was to empower women for business. 26 women attended the training with two facilitators. The women in are involved in different businesses including selling vegetables, cereals, drugs, hire of tents and chairs, tailoring and selling of cloths etc. Pastor Paul of House of Hope Chapel believes the training will go along way to empower the women to get into business. The training was for a day with interactive sessions. Pastor Paul observed that women have an interest to do business however some have a challenge of raising capital. He also noted that it befits all men and the youth and is planning on rolling it out to the rest.

Pastor Paul of Kinale had a difficult time in February attending to his Sick mother who finally succumbed. We pray for him and family to be strong and remain steadfast in Serving God.

• Most parts of country, Kenya, is experiencing a dry spell and we pray for the rains before the situation gets off hand.
• Missions Outreach planned by House of Hope for April
• Completion of Lositeti Borehole to enable the community access to water