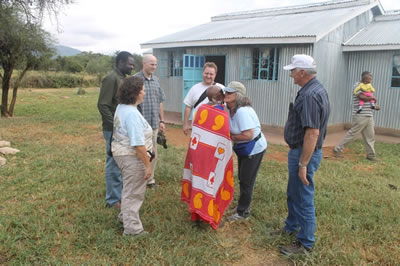 The team from the US: Joyce, Eric, David, Forest, Sherry and Okongo visited Kenya on the 10th Mar. 2013, after visiting Ethiopia. The team visited Noosikitok village, where they participated in the school feeding program. They met the leaders of the village too.

The team also visited Enkokidongoi village, where they met the pastors from the region.

The pastors shared with the team about the mission centre, Matapato, and also the team donated English and Maasai Bibles to the pastors for their respective churches.

Rev Okongo sharing with the leaders

Sherry (L) and Joyce posing for a picture with the women

Posing with the Maasai Bibles

Joyce posing for a photo with the women

Group photo of the leaders at Enkokidongoi

Lositeti hosted the team and they shared their successes and challenges. The main project in this village being the water borehole that is due to be drilled by Unite 4 Africa, Inc in collaboration with the community.

They also visited Enoosampurrmpurr primary school where sanitary pads were donated to the girls. We hope this will go along way to empower the girls in the region.

The team visited Moses Rianto’s home, the Vice President of Unite 4 Africa, Inc. Moses shared with the team about the neighborhood and the lifestyles of the Maasai people. The main challenge being water for the Maasai without conditions as done by other people. He said he had been praying for the provision and the team broke the news through Rev Okongo that a borehole shall be drilled to help the Maasai community.

Team in lositeti, Moses sharing with the team

Rev. Okongo and Rev. Rianto sharing with the team and the leadership counsil at Lositeti

Team praying for the land that is designed for the water well, the neighbors and the community

The leadership council of Kinale has set on an investment agenda to buy tents and chairs. The items will be hired at some fee for any function that takes place in the community. The proceeds from this project are intended to go back to the community through various select projects.

Pastor Muchiri met the first team to be trained on bridges one on the 5th Mar. 2013. Five of the team are very active and are using the materials to reach out to people. They however said they haven’t been good in relaying information to the pastor to share with the U4A network. We hope that they will improve on this. The pastor plans to take them to other villages where they will minister to people.

Kenya had its general elections held on the 4th Mar 2013. The nation elected the President, Governors, Senators, Women representatives, Members of Parliament and County representatives. The process went on peaceful and didn’t experience extreme cases of violence. The presidential elections were however disputed and the supreme court of Kenya upheld the elections and so Kenya has the 4th President elect, Uhuru Kenyatta. May peace, love and unity dwell in this lovely country, Kenya.

House of Hope Chapel did an outreach in Kokal village at Magunga School. The community gathering of about 250 people was divided into groups and did Bible Study. Pastor Paul reports that the feed back from the group leaders is the need to do more of the Bible studies, which lacks in the village. He prayed with 7 people who were facing challenges in their lives and also has a considerable number of young people and women already attending the House of Hope Chapel in Katito.