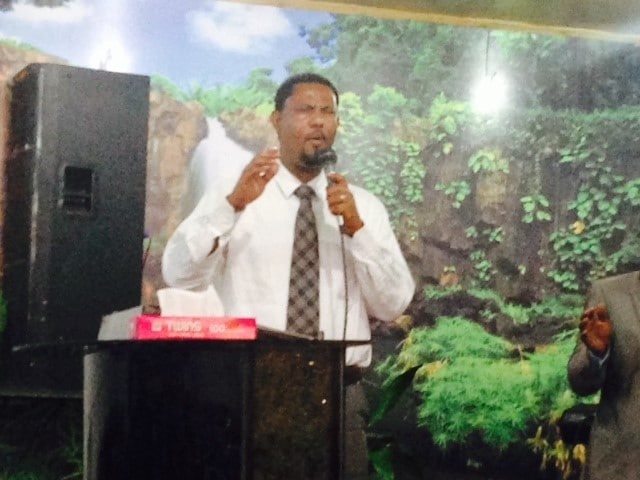 I. Additional New Church has been planted in Nazareth

By the grace of God we are able to plant the 5th additional local church in Nazareth town. Just two weeks ago we launched the church officially and conducted thanksgiving program. I preached and prayed for the new leaders of the local church and for those who contributed a lot for the realization of this vision.

Based on the 2007 Census conducted by the Central Statistical Agency of Ethiopia (CSA), this town has a total population of 220,212, an increase of 72.25% over the population recorded in the 1994 census, of whom 108,872 are men and 111,340 women. So, we need to have more Churches in the town. The town is very strategic to reach out the surrounding towns and villages (Ex. Arsi Zone), which is predominantly Muslim population. This town also one of our major training hubs and we have been trained many local missionaries and church leaders so that they get equipped and transform their community.

Pastor Samson W.mariam prayed for the leaders and ministers of the local church

Two weeks ago we have ordained one of our faithful minsters Abera Kumbi as Pastor in one of our local churches in Welenchity. He has been serving the Lord as missionary and evangelist for the past 15 years by proclaiming the Gospel of Jesus Christ, planting many churches in rural villages and making many believers to become true disciples.

We believe that he will keep continue laboring in the kingdom of God and impact many people by his leadership so that the church in that region will become a change agent for the community.

We had good time in our general assembly meeting. More than 200 leaders across the country gathered together for prayer and consulting on the current trend of our movement and the movement of Islam.

I spoke on the title of “Preach the Word…in season and out of season”. The leaders encouraged by the message and by the presentation and we have decided to preach the Word alone with out compromising it in any circumstances. We declared that lives change by the preaching and teaching of the word of God only.

We have heard many stories from our leaders, sharing experiences and praised God for what He has done in our country and beyond. One of the testimonies I have heard is that God has given us an open door for the Gospel in Afar region where the Muslim nomadic people resides. Praise God!

Pastor Samson was speaking in the general Assembly meeting on the Title of Preach the word in season and out of season.

This is God’s appointed time for our country Ethiopia. The harvest is ready and plenty. God has prepared the heart of the people to hear the Gospel message. At the same time the enemy is trying to hinder the church not to become an active agent in this process. Please pray for us in the following areas: –